I used to consider myself an “urban explorer”–someone who loved going into old and abandoned structures, such as hospitals, apartment buildings, and warehouses. I was always drawn to the sense of adventure and discovery in these vacant buildings, and I loved to see what people had left behind. A few years into my urban explorations, a friend said he’d found a place around an hour out of town—an abandoned farmhouse. It was an isolated site, and we’d have to go pretty far out of our way to check it out, but we were told it was worth it. We knew some crazy stuff had happened there—my friend, Josh, had mentioned it was previously owned by a cult—so we wanted to see it for ourselves.

Last October, we drove up to the house. That last few miles of the trip were over a muddy, rocky dirt road surrounded by rows and rows of trees. The house emerged in front of us, a two-story Victorian with a beautiful roof. It looked like a beautiful, peaceful building—somewhere I would have loved to live after putting a few months of hard work into it. It was in pretty bad condition, but I was pleasantly surprised by the lack of graffiti and litter. The windows and front door were boarded up, but the back door was open, banging around in the wind. 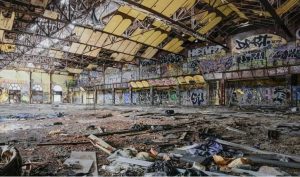 A photo of a separate exploration.

We walked around the exterior of the property, finding a few sheds and the corpse of a truck. There was a collection of white stones scattered around the ground, forming a spiral pattern. I bent to examine one of the stones, discovering that patterns had been etched into its face. It was weird, but we didn’t think much of it; maybe the nearby college was using the property for an art project.

We eventually made our way into the house, moving from the entryway to the living room. The space was filled with dust-covered furniture, the coffee table turned on its side and rodents visibly moving under the couch cushions. The place was a mess, but it was the thing I loved to discover. We found a few family photos—ostensibly, the people who lived there before the place was abandoned. I stepped back to examine the photos altogether, noticing something odd. Their faces had been partially scratched out with spiral shapes similar to the rock formation we’d observed outside. “That’s weird,” I remembered myself saying.

We moved from the living room to the basement, descending the craggy steps carefully. Not carefully enough, apparently—five stairs from the bottom, the wood gave way and I plunged through the material into several inches of tepid water. Initially, I didn’t completely realize what happened, but then my legs started burning; I dozens of splinters were stuck into my legs, making movement both agonizing and very, very difficult. The pain began to spread up to my torso, and I began to feel woozy. Before passing out completely, I looked around to survey the room. Something moved in the corner, and I could have sworn I saw a face. It must have been a combination of fear and pain, but I blacked out.

When I woke up, I was in an ambulance. Josh had called 911 as soon as I fell—the right call, despite the illegality of what we were doing. After a few hours of stitching and more than enough vaccinations, I was out of the hospital. I still think back to what I saw before passing out—a ghostly face. Was it a member of the family who had lived there? Was it a homeless guy squatting in the basement? Or, was it something more sinister—there had been more than enough creepy shit in and around the house. What were those spirals? I’ll never know, but I still think about that day from time to time. Basements are creepy, man.