My partner and I have been together for a while—a long while. We met in college and moved in together after graduating. We got married four years after that, when we were 26. We’re both currently 58 years old, so yeah, I’d say that’s a pretty long time. They’re my best friend, my closest confidant, but wow do they get on my nerves sometimes. You know how when you begin a relationship and certain things piss you off, but you expect your frustration to just fade with time? Well, it doesn’t fade. I love them more than anything, but every once in a while, we really do need our own space.

When we moved into our current home, we both had one new requirement. We’d always sought out homes with large windows, updated kitchens, and built-in shelving. This time, however, we wanted an extra living space. Here’s what the idea was: one of us would take the living room as a private space, and the other would take the additional living area as a private space. That way, we’d have the ability to have private time when we wanted to escape each other for a few hours. We were expecting to just get a place with an extra bedroom, but what we found was even better.

We found… *drumroll*… a basement. A finished basement. We didn’t think it would be possible with our budget, but it happened. They took the basement as a den/office/gym, and I have the living room as a studio. I don’t know what we would have done without this space; honestly, I think not having these areas would have killed our marriage. Regardless, I am so happy to report that the basement worked out perfectly.

I can honestly say: my basement saved my marriage! Sure, basements can be spooky, scary, and isolating, but to some they’re the perfect space for independence. 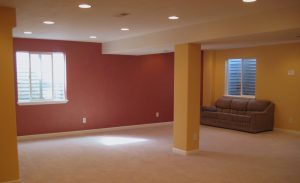